What are the best RetroGaming games? 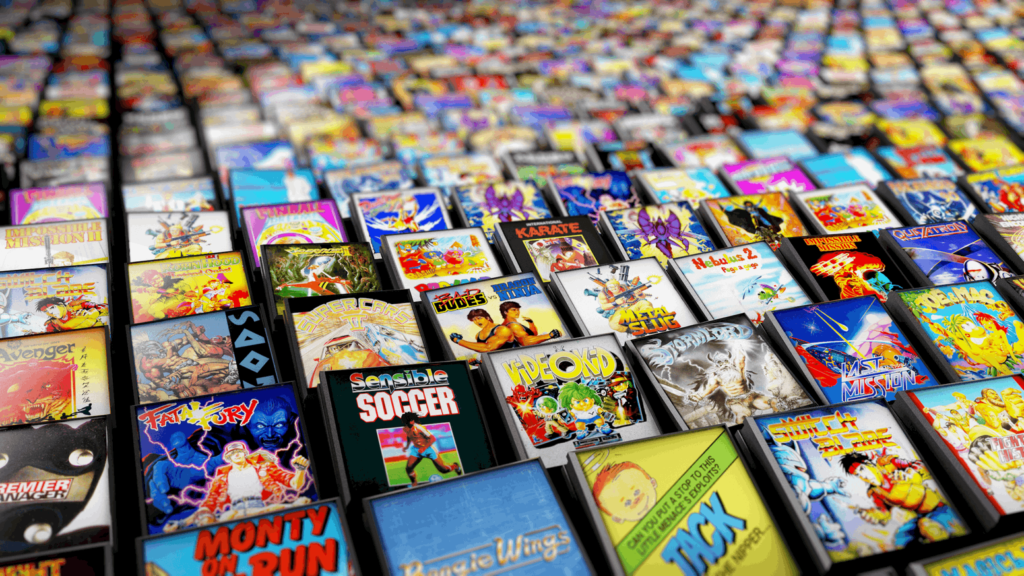 In this article we review the best retrogaming games. From Pac-Man to Space invaders to Street-Fighters - Flex Arcade

Arcade games, popularized in the 1980s-1990s, generally refer to a arcade machine offering a video game. They were mainly intended for amusement parks or supermarkets. Equipped with a coin mechanism, these machines are installed in the arcades, hence its name, in order to attract as many players as possible.

Other varieties of arcade games are pinball machines, redemption games (redemption game) where you have to push coins or lint-catching machines. From the 2000s, arcades began to become increasingly rare. New generation consoles, each more powerful than the other, have taken the video game industry by storm.

It is only in Japan that arcades have survived and are still up to date. There, for example, it is possible to immerse yourself in the cockpit of an airplane and fight against Japanese players across the country thanks to arcades connected to a network. This offers a very unique gaming experience. This immersion is so special that players have no choice but to go to these arcades to enjoy such gameplay.

So what are the best retrogaming games?

Originally called Puck-man, it's a Namco video game developed by Tōru Iwatani in 1980. Who doesn't know the famous Pac-Man? We could not make a list of the best retrogaming games without mentioning this classic. It is true that the same could be said for all retro arcade games, but this concept has been declined on several supports, by the fashion industry and such, that it is impossible not to have seen it. This simple game is endlessly replayable: players must eat big dots, without being fooled by the colored ghosts. Pac-Man was a bit avant-garde in introducing the "maze" genre, at a time when shooters were ravaging.

Having invented the concept of space shooter (fixed shoot them up), Space Invaders is an uncolored entertainment where we have to defend our spaceship from aliens. It was developed in 1978 by the Japanese company taito, and the creator is Tomohiro Nishikado, which was inspired by a dream of his where school children are attacked by aliens while waiting for the Santa Claus. Together with the previous video game title, it is one of the classics of retro-gaming and quickly received acclaim from gamers. Unusual fact, it is said that this game even caused a shortage of 100 yen coins (for the coin mechanism).

Released in 1981 by Konami, this game teaches us above all to cross the street by looking well on both sides. With basic forward and backward jumping motions, watch out for oncoming traffic and alligators in the waters and not sink any marbles into the lake. Proof of its success, Frogger was adapted on Xbox 360, PC, Atari 2600, Game Boy, PlayStation, Super Nintendo and iPhone. The game is really addicting. Let's not forget the fact that the Seinfeld series mentions the game in one of its episodes, where the protagonists visit a pizzeria and discover a Frogger machine there.

This is where the idea of "gore" was introduced to games. It's a fighting game with pretty bloody scenes, but that's also what attracted a lot of gamers. It was released in 1992, created by Midway, and is a direct competitor to Street Fighter. What makes it more attractive is the fact that the graphics are very realistic, which further highlights the violence of the gameplay, with the well-known "Fatalities" / "Finish him!" ". The main character, named Kano, must fight against a defenseless enemy. We see head tearing, setting fire to opponents, electrocuting some, sending kisses that kill or even impaling them. Yes, it's no joke! We couldn't make a list of the best retrogaming games without mentioning Mortal Kombat

#test Before Super Mario didn't break into the gaming scene fighting against Bowser, it was Donkey Kong's very first boss. This entertainment brings together several genres, including the category of platform, racing and rhythm games. Produced by Nintendo in 1981, other versions have also been published by Rare, Namco and Paon. Donkey Kong literally translates to "Donkey Gorilla". It remains one of the earliest platformers, along with contemporaries like Space Panic and Apple Panic. Mario's character was known as Jumpman, and along with the gorilla Donkey Kong and the damsel in distress to rescue, they were the hallmarks of video gaming.

Galaga, another mythical arcade game, is the sequel to Galaxian, the very popular shooting game. The gameplay and AI was quite advanced for its time 20 years ago. Placed at the bottom of the screen, you have to control a spaceship by shooting the enemies that come from the top of the screen. This title has been talked about, especially for being the first to allow the gamer to control 2 ships simultaneously. There are even online versions of it. This title is classified under the shoot'em up category and was introduced by Namco.

This game is the father of all fighting games. Its gameplay and graphics were already stunning for its time. Developped by Capcom in 1987, the sale of this title exceeded sixty million copies and was ported to several different platforms. The button system was analog at the time. Subsequently, due to mistreatment of terminals, this system was abandoned. By the way, in arcades entertainment was better known as Street Fighter II The World Warrior. The game offered 8 playable characters and is certainly one of the best retrogaming games.

Teenage Mutant Hero Turtles, released for the NES in 1989, belongs to the category of platform games, and was developed by Konami. The game of multiplayer beat 'em up brings together up to 4 gamers. Just roam the streets and face off against the villains that come your way. It was released in North America in 1989, under its current title, and in 1990 in Europe. The gamer controls one of the turtles, which he can change at any time. Each of his latest has a specific weapon, shurikens or boomerangs, among others. The storyline is quite straightforward, exploring buildings and sewers.

This 3D shooting game, brought to you by SEGA and released in 1995, also allows fun with 1 friend. You control the target with the mouse to shoot down the bosses. The crime rate is at a high level in the USA, as a police officer you have 3 levels to pass. With your co-player, hunt down and eliminate the bad guys. The latter will appear from windows, travel on motorcycles and even have the means to fly away. This title is part of the Virtua Cop series.

To end the list in style, let's mention Tetris, released in 1984. This title has even been the subject of a war for the appropriation of rights. In this video game, you have to make complete lines by placing the different shapes (tetrominoes) falling from the top of the screen in the right place. You can return these. Lines that are completed disappear and earn points for players. This game has no final level, it ends when a tetromino remains blocked outside the game frame.

Many of today's popular games were inspired by retro video games. For gamers born in the 2000s, arcade machines don't mean much. On the other hand, for the elders, they symbolize the very birth of the games, thegolden age of video games. Fighting games or slot machines are what made them even more popular. A simple concept, easy to learn, which has attracted many people.

We hope you liked this list of the best retrogaming games, and you, what is your favorite retro game? 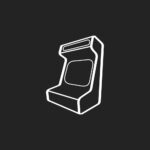 At FLEX we love video games, it is this passion that rocked our childhood (and perhaps yours!?) that drives us on this adventure, to design and manufacture superb machines to replay the best titles of the young history of video games. We produce a “ready to play” range but also make special orders for unique and characterful arcade terminals using for example the base of a 300L wine barrel or a French army ammunition box ! We are at your disposal for your projects, share your wildest dreams, we love to make them come true. 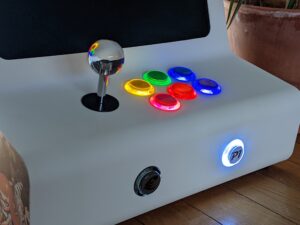 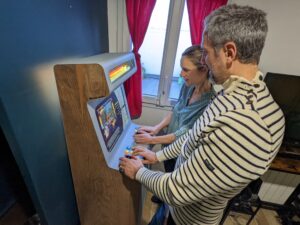 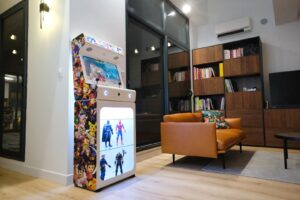 Mount your terminal yourself (tutorial)

Are you a fan of RetroGaming? Want to follow our news? Subscribe to our newsletter to receive the latest news!

Flex Arcade on the web

by Caddy
On this site, we use cookies to measure our audience, maintain the relationship with you and send you quality content and advertising from time to time.
SettingsI accept
Manage consents

This website uses cookies to improve your experience while you navigate through the website. Out of these, the cookies that are categorized as necessary are stored on your browser as they are essential for the working of basic functionalities of the website. We also use third-party cookies that help us analyze and understand how you use this website. These cookies will be stored in your browser only with your consent. You also have the option to opt-out of these cookies. But opting out of some of these cookies may affect your browsing experience.
Necessary Toujours activé
Necessary cookies are absolutely essential for the website to function properly. These cookies ensure basic functionalities and security features of the website, anonymously.
functional
Functional cookies help to perform certain functionalities like sharing the content of the website on social media platforms, collect feedbacks, and other third-party features.
Performance
Performance cookies are used to understand and analyze the key performance indexes of the website which helps in delivering a better user experience for the visitors.
Analytics
Analytical cookies are used to understand how visitors interact with the website. These cookies help provide information on metrics the number of visitors, bounce rate, traffic source, etc.
Advertisement
Advertisement cookies are used to provide visitors with relevant ads and marketing campaigns. These cookies track visitors across websites and collect information to provide customized ads.
others
Other uncategorized cookies are those that are being analyzed and have not been classified into a category as yet.
Enregistrer & appliquer